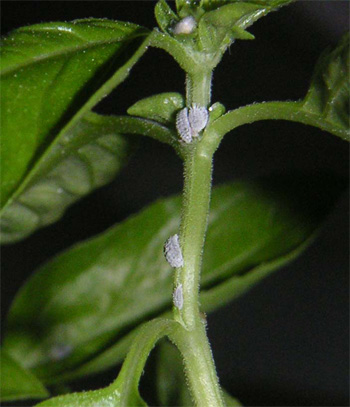 I contacted David Schulz with the Biology Deparment at Brandeis University with the above photo of these questionable creatures, and he identified them as Mealybugs. Here is an excerpt of his reply:

This is a kind of insect called a “scale insect,” named because they secrete a waxy covering (that powdery white stuff) that they then hide under and feed on plants…hence they look like scales on a plant. This kind is also known as a “mealybug.” The scientific name of the family for this particular guy is Pseudococcidae. These are pretty common pests. If you don’t have too large an infestation, you can actually control them mechanically (*squish*). Some people also try dabbing running alcohol on them with a cotton swab or such. They reproduce pretty slowly, so taking them out one-by-one can be effective. For a larger infestation, you may have to ask your garden center what they recommend. Usually you can get away without using chemicals on these guys (you don’t want to be eating pesticides on your basil), something along the lines of an insecticidal soap may work well.

He was right, they were secreting a waxy coating. It was all over The Basil Plant’s leaves and it was getting on the window The Basil Plant sat next to. He was also right that I didn’t want an insecticide on The Basil Plant – because I wanted to eat it. So I tried dabbing the Mealybugs with a cotton swab and rubbing alcohol, and they pretty much melted on contact. But try as I did to kill all of the Mealybugs, they just kept coming back. Eventually, there were really small, white, flies flying around The Basil Plant, too. I think those were Whiteflies.

Eventually The Basil Plant died. Here is a photo of its gruesome body.