Posts from the Sustainability Category

Friends of David Kadavy, rejoice! Given my current living situation, I was finally able to accomplish one of my life’s dreams. It’s been a long and hard road, but I made it! I am finally free…

END_OF_DOCUMENT_TOKEN_TO_BE_REPLACED

Have you ever wanted to start your own suburban development, but just couldn’t think of what to name it? Behold the Suburban Development Name Generator (v.1.0). It can provide you with dozens of creative names such as Quail Run, Eagle Run, Huntington Park, Whispering Ridge, Shadow Ridge and many more!

END_OF_DOCUMENT_TOKEN_TO_BE_REPLACED

It amazes me that people face with such incredulity, findings such as that temperature has an effect on aggression and violent crime, and daylighting enhances learning. Pardon the childish sarcasm, but gee, imagine that…our behavior is affected by our environment.

END_OF_DOCUMENT_TOKEN_TO_BE_REPLACED

If you’re going to have Affluenza, at least get some environmentally sensitive stuff through Grist Magazine‘s green buying guide. Okay, so it’s actually a green gift guide, but the holidays are way past.

The Economics of Urban Sprawl

AJ Kandy of “West of the Expressway” has made some perceptive observations on The Economics of Urban Sprawl. Not only do the suburbs exterminate culture, they may be an economic drain all-around. It’s great to make the decision to not buy a gas guzzler, but how about designing our lives so we drive less to begin with?

The eventual realization of these economic consequences may result in the End of Suburbia, looks like an interesting documentary, analyzing “the greatest misallocation of resources in the history of the world.” It probably won’t be coming to a theater near you, but they do encourage public screenings. Anyone up for one in Omaha?

Natural Capitalism recognizes that there are four types of capital in a functioning economy.

“Capitalism, as practiced, is a financially profitable, nonsustainable aberration in human development. What might be called “industrial capitalism” does not fully conform to its own accounting principles. It liquidates its capital and calls it income. It neglects to assign any value to the largest stocks of capital it employs—the natural resources and living systems, as well as the social and cultural systems that are the basis of human capital.”

I have not read the book yet, but I imagine it presents even more working models of Natural Capitalism than even Amory’s lecture did. One good example was Interface Flooring (yes the same Interface Flooring that I created my first carpet tile sample rug from). When you think about it, you don’t want to own carpet. You just want to use it for awhile. Apparently Interface is now providing flooring services. They’ve developed carpets that can be re-manufactured with no waste. They install the carpet, come back every few months and replace the worn tiles (carpet doesn’t wear evenly, of course), and re-manufacture those tiles. The result is much less impact on the environment, and its even more economically efficient.

Amory Lovins also has a house in Old Snowmass, Colorado that has no mechanical (heating) system. Oh, and he farms bananas in that house, and his energy costs are negative…with technology that is 15 years old.

He is a brilliant speaker, and is clearly brilliant in general and I look forward to learning more about his ideas. I will keep you posted. 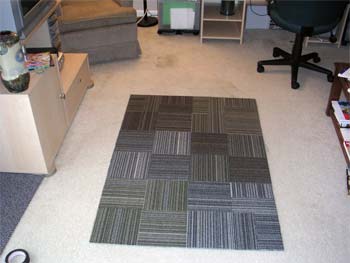 END_OF_DOCUMENT_TOKEN_TO_BE_REPLACED

There are very few resources on sustainable print design, but Print Design and Environmental Responsibility from the AIGA Design Business and Ethics Series is a good start.

After reading it, the outlook for sustainable print design in America looks pretty bleak – not that personal experience has indicated otherwise. I asked my printer the other day if he takes special measures towards minimizing his company’s impact on the environment, and his response, with a confused look on his face, was “well, we recycle?” I’ll have to get him a copy of this manual – maybe to be responsible, I’ll just send him a PDF.

I’m also considering making the manual the subject of my book club one of these months. That, or/and Cradle to Cradle.